Back to Baseball trading and the Commemorative Patch discussion

I've touched on this issue before.  August of 2015 to be exact.  I enjoy collecting commemorative manufactured patches, historical stitches and retired number inserts from Topps flagship blaster boxes between 2009 and 2012.  I see few here and there, but usually not many.  Sure, I could go on any number of auction/sale sites and purchase, but what fun is that? Trading is what I enjoy doing when I get the chance.

Anyway, these gems were inserted at the rate of one per blaster box.  No more, no less.  Actually the bigger issue I had to navigate around was in lieu of collecting these cards, I gave up any chance I had at pulling an autographed or relic card.  I don't recall any of the blaster packs from those years having any odds of pulling real auto or relic cards.  I may be wrong though.  That age thing plays a role.  So for $20, one patch and a bunch of cards and inserts for set building.  I truly enjoy the set building more than the big pull.  I've had some big pulls in my life and don't spend money in bunches to find the next one.  If it comes, it comes.  If not, life goes on and my collection still grows.

I am selective on what I'm looking to add to my collection in this area.  Topps flagship 2009 through 2012 Series Two only.  An odd stopping point, I know.  But, being unique in what we all collect is what makes for good collecting and a good trade.  You take what I don't want and vice versa.  I am , if I'm lucky, 30% complete in completing these sets.  And at 150 cards per year (yes, only 100 for 2012), that still leaves a good number of cards left to acquire.

In the past, I would see a card and usually know if I needed it or not.  Not so much anymore.  Too many cards and again, age has taken its toll on this old collector.  So what to do???  Of course, put down in writing a list of cards needed just for this group and add a new tab to the blog.  Genius!!!  I get so much activity on the main want list yet I'm not feeling the same love for the new tab want list.  I'm not really sure how many people collected or want to trade these cards.  Yes, the availability of a want list is much greater when you're looking at any and all years from 1951 through 2016, but one can hope.

Back to this subject.......I was on the receiving end of a trade that gave me a large number of blaster inserts post 2012 Series Two that I am hoping will result in a trade with one of the few readers I have to check off a few on my list.  I also have some duplicates of the 2009-2012 time frame as well for those that also try to collect these same sets of cards. 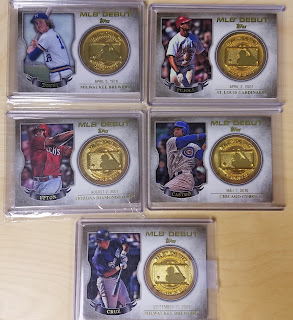 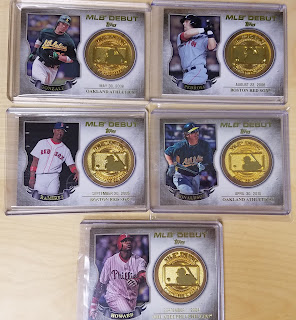 Upon first review, anything of interest from the first batch of pictures?  How about these? 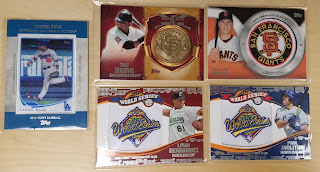 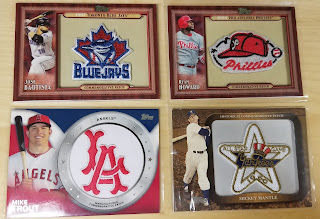 There has got to be something the piques your interest.  As an FYI, the Mantle card has a light half circle crease on the right side background behind the upper right portion of the star.  Beyond that, the cards are in very nice shape and hopefully yours are as well.