Ok so my hockey card post has been lingering for far too long.  Time to get back to baseball.  Although there remains a few hockey cards left to be had, the list has been pared down tremendously thanks to a few select traders both from the US and Canada.  Canada more so, in the Calgary area to be specific.....thanks Tobias.  Now that November is upon us, Baseball reigns...say what????  I know...the year ended with the spirit of the goat being vanquished.  As a Chicago dweller, you'd think this would be a joyful time.  But alas, as you can probably see from a few previous semi-annual posts and this post's title, the Cubs are not my team.  I'm happy for the city, the team and especially those that suffered for up to 108 years.  Just as I felt ok with the Red Sox moving past the spirits of the sale of Ruth in 2004.  To be clear, I was good with one, not three.  So 2007 and 2013 be damned.  Anyway, I'm happy that my team, with it's small number of only 27 rings, was able to sell the assets that were doing little for today, to get a farm system that is now top 5 in the league.  Tomorrow brings a new dawn.

So, this post turns toward the improbable.  A mere 6600+ card set.  The set of every game played at "Old" Yankee Stadium.  I'm 10% of the way to completing this set.  Yes, you read that right, 10%.  It's something that has lingered for years, but never garnered much attention.  There is always too much other stuff that needs to be completed first.  And if Topps could stop releasing more product, I'd have a chance but you know how that goes.  I would love to work on this set at some point and do a tiny increments through trading, but reality is, this may be the one set that eludes completion for me.  Dare I say that!!  I have tried to get closer to the outer bands of the set. 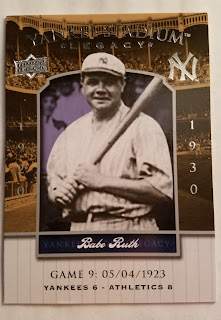 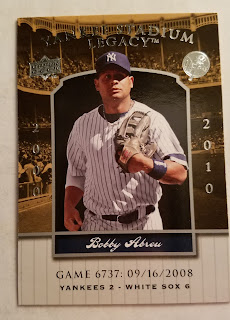 So if you can get me closer to the first and last game, that would be a welcomed addition.  Or if you can fill the 6,000 or so gaps in between, I'd be a happy collector. For clarification, I did attend the last game at Old Yankee Stadium.  It was a magical moment as a Yankee fan.  Remind me to share the drawing that my wife made with the tickets from that game.  It's an amazing piece of art if I do say so myself.  Now if I could only find the card that matched that game.......that too would be a great addition.  I do have a few doubles from the set that are available for trade. 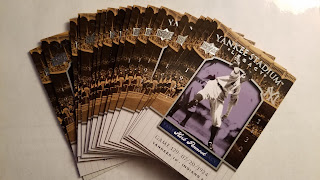 In addition, a few standouts made the doubles pile.  "....the luckiest man on the face of the earth." 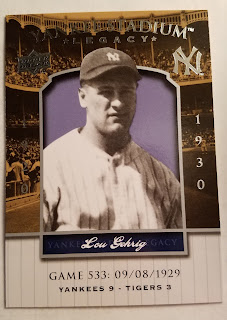 And the one and only, "Mr November" 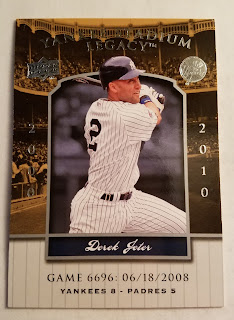 They both sit in a pile of ready to be sent off to another land of milk and honey.  Wanting to be replaced with those that make 10% become 11% and then 15%.  Oh what a day should the set venture out of one 800 count box into a second.  I'm not picky on what you have, only that you have some for trade.  Whether it be for the same in return or something different, let me know.  Trading is always something that gives me hope.  One can never find too many traders.  If this is of interest reach out.  Until 2017 (As I suspect)....I bid you farewell.