First I must say for anyone that reads my blog and has anticipated part deux, I apologize.  It has taken me almost four months to get to this post.  You can say I've been busy.  Understatement.  Just ask the wife and kids.  I have made a few trades intermittently during this time but for the most part, when my work day ends, I haven't been much in the mood to put my thoughts in print fashion.  Mostly I've tried to wind down by thumbing through a few hundred boxes looking for a few cards to send off to a fellow trader.  Or opening a couple of packs here and there to enjoy my hobby (or obsession, or neurotic behavior, if you will).  So as we move into 2014, I will look to post more often than once every three or four months.  I think I've crossed that line at work that will allow me to be successful in that statement.  So look out 2014, this blogger is staring you down.  I'm starting out quick on January 2nd to make my mark.  Let's just hope I don't end up a premature ejacu-blogger and wander off into oblivion for a few months.  Anyway, back to my dilemma....

As you may recall from last years entry, structure and order is of vital importance to me in my collection, at least from the layman's view.  Boxes in order by year and then alphabetical within that year with one exception.  Topps Flagship will always be the first set encountered in a year.  Beyond that, alphabetical order rules.  I look at the four or five dual row boxes that contain the hundreds and hundreds of relic, jersey, bat, auto cards, et al.  They are currently in alphabetical order by last name of the single individual on the card. First name, Bobby Abreu through last name, Joel Zumaya.  Easy to keep in order, easy to identify where they belong in the boxes.  In addition to these cards, I do keep some single relic cards in a different box based on the set in which they belong.  For example, you will find my Upper Deck 500 HR bat/auto cards all together along with the Upper Deck 3000 Hit Club bat/jersey/auto cards.  They are a subset within themselves and that makes sense in my mind. 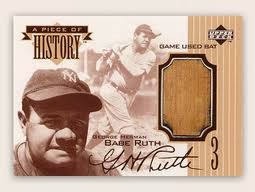 A few other subset minded cards fall into that same situation.  The Yankees Signature Series single, double and triple auto cards.  Again, acceptable order.  But now this is where things start to unravel... 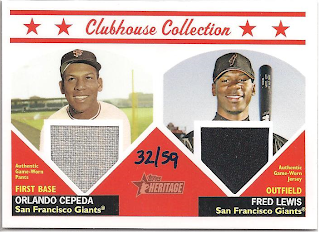 Where does one put this when trying to maintain a sense of order?  I own a few clubhouse collection cards from other years but nothing close to being complete as the others mentioned above.  I don't keep collect nor do I order cards by team so that goes out the window.  Do I sort by the first player (as my wife has suggested in a moment of confusion as I explained my concerns).  That could work but what if I wanted to see if I had a Fred Lewis relic?  There's no way to find this if that were the order of the day. 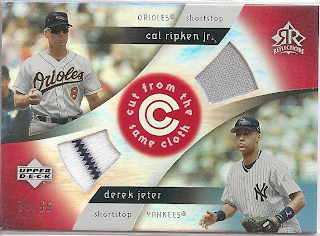 How could you possibly put one ahead of the other for this card?  Ripken rules, Jeter rules????  And who is listed first?  Ripken going from top to bottom, Jeter going from left to right.  The Yankees are "my" team and there is no way I could make Ripken priority.  At some point logic will prevail, but it may be when I'm six feet under and this is card #426 of 985,438 on the auction list as my kids sit in the wings waiting for their portion of the proceeds.  You see why it is I can't figure this out. 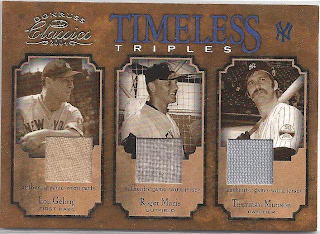 Yeah, enough said.  Here we have three members of the years gone by Yankees folklore.  I actually think Donruss was trying to help me out with this gem #'d to 10.  The players last names are in alphabetical order, oldest to newest. and finally most desired home jersey to flannel grey away to the somewhat modern day polyester away jersey.  But still, let me see how many Maris relic cards I have.....Ooops I'm missing one.  I know I own this but who else is on the card?  Could it be Ruth, Gehrig, Dimaggio, Berra???  Where in the hell is that damn card in one of these damn boxes?  Deep breath, deep breath.  Count to ten.  It will show up.  It has to.  My kids haven't a clue how to find this and seeing that four of them are girls, they wouldn't even know why to look for this one particular card.  But Nolan....the blog namesake.  He does, he's a smart four year old.  He knows a smidgen about these cards as we share our moments of daddy screaming...DON'T GRAB IT BY THE CORNERS!!! NO, NO, NO, DON'T DROP IT!!!!

Ok, I'm back.  Anyway, as I was saying, I reach out to my fellow bloggers for input.  I'm curious how you handle this type of situation in your collection, if you do.  Maybe you don't.  Maybe this is just one card settling between a 1986 Donruss Jose Canseco Rated Rookie card and a cherished 1989 Fleer Bill Ripken F*** Face card.  But maybe one of you has the key to making my neurosis go away, at least in the short term.  I'm asking for help.  Who's offering free advice for this wandering soul?  I guess I'd be willing to shell out 5 cents for that psychiatric help.